On the way home from Run Thoughs, about 1/4 mile from home, on my dark, quiet, dead end, country road, I saw a dog. An unfamiliar dog, with no person nearby. It was cold, headed below freezing, and the dog’s body language said, “I’m in unfamiliar territory.”

So I stopped the car, got out and called to it. It stopped moving. I mentioned that I had cookies and it came closer, then allowed me to grab its collar. No tags. I wasn’t sure that grumpy Chico would allow the dog anywhere near him, I couldn’t bring myself to leave it there, so I called the police station in my town (that’s how you get hold of the animal control officer), but at almost 10 PM, there was no one there and I was directed to call the emergency dispatcher. This is no emergency, but how else to contact animal control? Dispatcher grumpily agreed to contact the animal control officer, and I waited, hand on the collar of this dog for a good ten minutes and nothing happened. No call to my cell phone, no car appearing, nothing. So I put doggie in the front seat of my car and went home. Chico gave one bark, I told him that wasn’t the thing to do and he stopped. Doggie  didn’t respond with any behavior that looked at all aggressive, in fact he cringed at Chico’s outburst.

I got Chico out of the car and into the house, put doggie in Chico’s car crate and went inside to think things over. Thankfully, I have a second crate (thank you N&L) in the house. I set that up in my back room, added a blanket for padding and a bowl of water, shut Chico in my bedroom and brought doggie in the house and ushered it into the crate (which it entered pretty happily). Then I posted a notice of a found dog to my town’s electronic bulletin board and started calming myself down (somehow there was a huge adrenaline rush from the “rescue”).

About fifteen minutes later, there was a knock on the door, it was the animal control officer. She looked at doggie, who by then had revealed that he was an uncastrated male, and said she was supposed to take him to the shelter – about 30 minutes away. We talked, she thought doggie looked OK in his crate, a tad bit crowded, but OK for overnight and she kindly let me have until 10 the next morning to find his people.

Chico was not at all interested in the room where doggie was. To me that was quite surprising, I had imagined that he would have a hard time letting another dog into his house. I gave doggie a bone and we went to bed. Doggie started to whine. He whined for an hour and I finally put in some ear plugs and went to sleep.

In the morning, I slipped a leash onto doggie (and started calling him Ralph) and he and Chico and I went outside for their morning pee. It was fine. Again, Chico was not at all interested in this other dog, he did his bathroom thing, Ralph did his and nobody had a bad word to say. When we came back in the house, Ralph had no interest whatsoever in returning to the crate (and he was too heavy for me to pick him up and shove him in), so I took a chance and let him and Chico free in the house. They didn’t argue, they didn’t snarl, heck, they hardly even sniffed each other. 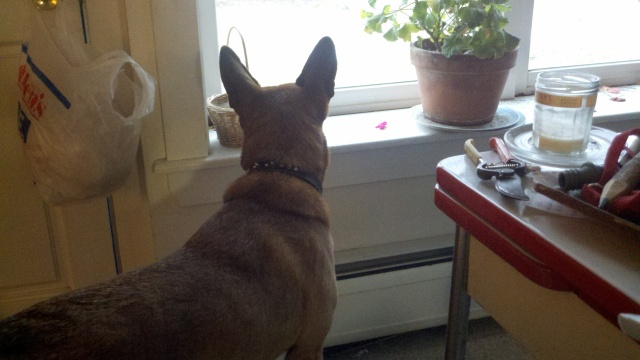 For the most part, what Ralph did was look out the window.

Ralph was wearing a studded collar with the Harley Davidson logo on it. That was actually a clue to his name.

There hadn’t been any response to my post on the internet and I was sure someone was looking for this dog. I called some neighbors, no one recognized the dog from my description. I called M, the man who works on this property, because he is a distance runner who knows a lot of the dogs for miles around and I thought he might recognize Ralph. He didn’t, but he knew someone who he thought might. M hopped in his truck and drove off to where that guy was working and I took the dogs for a walk.

It seems that M’s contact knew exactly what dog I had found – Ralph lives next door to him. Our walk got about half a mile from the house and an unfamiliar car came up the road, the windows went down and the woman driver called out “Harley!! Harley! There you are! Where WERE you all night!?” I explained that he’d been in a crate in my back room, safe and warm.

Harley lives about a mile and a half from me, on my same road but on the other side of a state highway. His people had looked for him until almost 11 the night before. I’m sure they were worried, but I am so glad that he didn’t have to cross that big road again to get home.

At two minutes past ten, I got a call from the animal control officer. What a pleasure it was to tell her that Harley had been reunited with his humans. I made sure to let her know that I appreciated that she had made a judgement call instead of just following the rules.

After all the excitement dissipated I went to dismantle the crate and fold it for storage. The water had spilled, so I took out the blanket and went to hang it on the line. Ralph/Harley had apparently been dissatisfied with his accommodations: 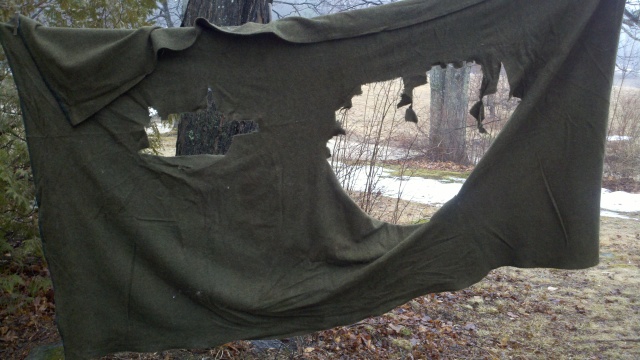 I gave him a bone before bed, I guess he needed to chew more than just one little bone.

But he doesn't seem to have swallowed any of it.

My father, in his sweetly-cynical way, is fond of saying “no good deed goes unpunished.” The blanket wasn’t expensive, if folded just right it will still function as a crate pad and I keep my saddle in that room. I’d much rather have ruined blanket than a ruined saddle.