A week of adventures

Posted on September 21, 2012 by annieriecken

Last Monday I made an appointment to have my vision checked and my eyes examined. They had an opening for Wednesday, sooner than I could have hoped for. I asked if they, like my orthopedist, are a dog friendly office. “Tell me about your dog.” I described Chico as a well behaved, forty pound, Collie-looking, mixed breed. “Oh, I think on Wednesdays our office is dog friendly.” OK, sounds good to me. I ought to have picked up that it wasn’t normal procedure for that office.

So, we arrive for the appointment and as I am signing in, I become aware of some rather urgent and intense communication in the area back behind the glass. Within a few minutes Chico and I are introduced a young woman and told that Chico can’t come to the exam room with me, but that “Nina used to work at the vet’s office and she will stay with him.”  OK, I guess that’ll work, here Nina, here’s the treat bag.

After about twenty minutes, as I am sitting without glasses or contact lenses waiting for drops to dilate my pupils to take effect, someone comes to ask me to sit with my dog since Nina has to go back to work now. Hmmm. Chico is happy to see me and lies down by my side. In another ten minutes, the doc comes to get me so he can look deep into my eyes and check their health. Nina was not with the doc and clearly had devoted as much time to this project as they would let her. No one in that office knew anything about Chico except what they had seen for the last thirty minutes – a happy, well adjusted dog. So, I took a cleansing breath, told him to stay, put my sweater on the chair, and followed the doc. I left Chico in the waiting room all by himself for another ten or fifteen minutes while they finished the exam. 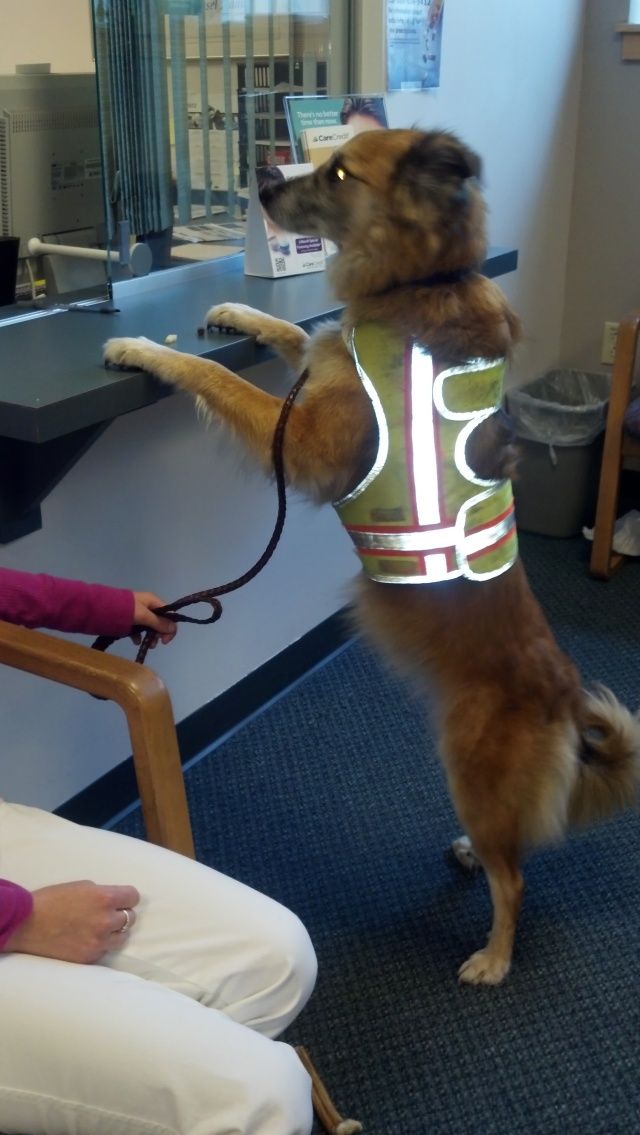 Nina is holding the leash while Chico says  hi to Rosemarie in the office. Thanks to optician Ruth Hushhour for the picture.

Apparently, he lived up to their expectations, was a perfect angel,*  made friends with everyone, and one person asked if they could adopt him. That means that when people came into the waiting room, he didn’t rush at them barking. I’m sure if that had happened they would have been in my exam room in under half a second to get me. And I bet my sigh of relief when we left the office created a breeze that could be felt all the way across the parking lot.

On Saturday, the Agility Club of New Hampshire had a picnic at American K9 Country. Julie said it was a perfect chance to Chico to socialize, so we went. It was so much fun! We ran late in the morning and didn’t arrive until the event was half over, but we got our licks in. There was an agility course to run (and we got in three runs), there was a photographer with a straw bales and chrysanthemums portrait background set up on the lawn outside. There were hamburgers, hot dogs and chicken off the grill with nice sides, there was a dog groomer giving free trims, a canine chiropractor giving free adjustments, and someone with a massage chair for the humans.

And there were lots and lots and lots of Shelties. Shelties, Shetland Sheep Dogs, are believed to be part of Chico’s background. They look like miniature Lassie dogs and have a trait that, for now, is crucial to Chico being socially successful – they are smaller than he is. So Chico was able to touch noses and sniff bottoms with at least five different dogs without ever thinking of even curling his lip. Yay!

Chico also had a chiropractic adjustment from Dr. Bruce of Indek Chiropractic. That involved letting a complete stranger touch him all down his back. It wasn’t easy for Chico. Not at all easy. The doc found three places that wanted adjusting and eventually Chico was able to let the places release. Chico moved around a lot, trying to get away from the strange person who was pressing on his sore parts. he pressed up against me and kind of rolled his eyes up at us, but he never snarled or growled. He wasn’t happy, but he trusted that I hadn’t put him in a situation where he needed to protect either of us. That’s a far cry from the dog of two and a half years ago, a dog who told the vet in no uncertain terms that she was too close when we were all in the same configuration (dog between two humans).

And next week Chico is going to Washington, DC with me. We’ll be staying with C and her dog Joey. With a separate apartment in the basement, it’s possible to arrange things so that, if the dogs don’t get along, they never have to share space. We’re all hoping that it doesn’t come to that, but it’s great to have the option.

*Except that he didn’t stay exactly where I told him to making it a less than perfect down-stay. The duration and distraction factors were sky high, so I’m cutting him a lot of slack. Compared to what could have (or would have in the past) happened, he was a rock-star in that waiting room.

2 Responses to A week of adventures