Across Arkansas in a day

Rest stop. People with two Pugs arrive at the same time we do. One slips his harness. Owner panics and runs after, dog runs away. I head away from highway going, “Cookies, cookies, cookies!!!*” Owner snaps into action and follows saying, “Want a treat? Want a treat?” As Pug approaches us, Chico snarls (thanks buddy), and dog backs away, but still stays away from highway. Chico and I left them all to sort it out, and they managed.

A sign on the side of the road advertised Peanut-Pecan-Cashew Brittle at exit 73 (Arkadelipha, AR), so I got off and followed the signs to Juanita’s Candy. The other customer in the factory sales room had driven two and a half hours from Shreveport, LA to buy Juanita’s brittle, so I figured I was on to something. When I made my purchase, I asked the clerk if there was a nearby place to get a sandwich, at “not a chain.” He asked if I like barbeque. I said it seemed like the thing to eat when in the area. He sent me back down the road to Allen’s Barbeque. They provided a very delicious and especially unhealthy lunch for under seven dollars. 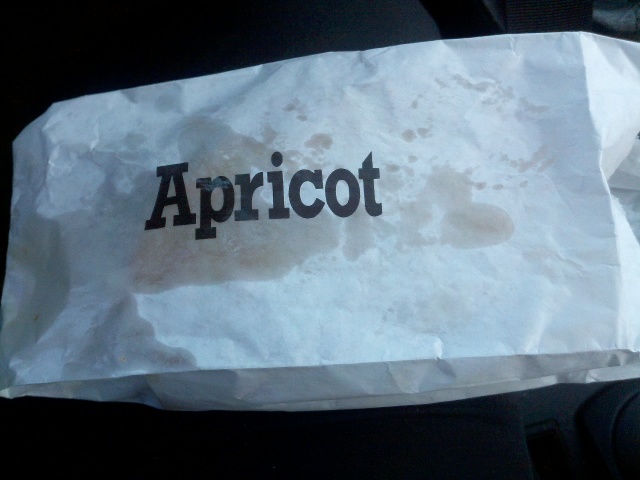 Fried pie. Take flaky pastry crust, roll into a 6 inch circle, glop some apricot jam on one half, fold, crimp, and deep fry, (thus adding even more fat to the pie crust). What’s not to like?

And they had the coolest straw holder:

Thanks to Gertrude, we made it to a La Qunita Inn in Plano, TX with no problem, ate some dinner from the supply box in the back of the car, and went to bed early. Dallas Dog Sports USDAA agility trial in the morning.

* Thanks to Sylvia L for that idea.

This entry was posted in Uncategorized and tagged Arkansas, Barbeque, Field Trip, I 40. Bookmark the permalink.