Posted on December 3, 2013 by annieriecken

The first night Chico came to my house, almost four years ago, he hopped up on the couch, and I dragged him off and made it clear that I wasn’t going to have the dog on the furniture. Or my bed.

But things change and it took about six months before I invited him up on the bed at night, and not much longer before I revised my policy on the couch. It started to sound like fun to cuddle on the couch and watch a movie. But Chico would never get up on the couch with me and settle in. And really, who can blame him, it could have been a trick.

A few months ago, I got a new-to-me couch from my family and the other night I got Chico up there for a while and gave him a nice treat while he lay next to me.

The following morning, I woke up and he wasn’t on the bed. And he wasn’t on the floor of my room, not on either side of the bed. There was no Chico on the rug in the office, another place he finds agreeable. I went down the stairs, glanced at his bed – no Chico.

I finally found him, sacked out on the couch, so fast asleep that he didn’t wake up until I sat next to him and started to pet him. Then he looked, I’ll suggest, a bit sheepish, but happy. 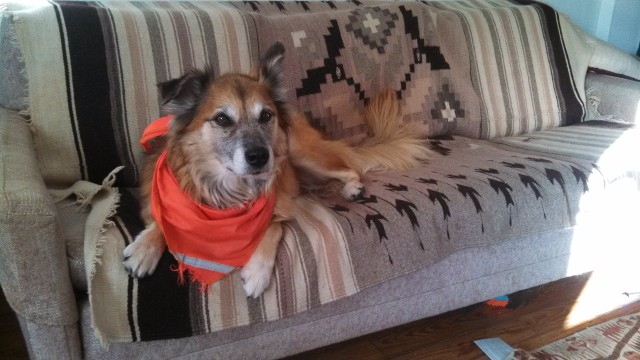 So, I took one of his blankets off the bed and covered the couch. Now he seems to think it’s a dandy place to hang out.

This entry was posted in Uncategorized and tagged dog on the bed, dog on the furniture. Bookmark the permalink.

5 Responses to The couch