Is Chico’s fear of other dogs based on their body-type?

I’ve been wondering about Chico’s reactivity to other dogs. It’s gotten a lot better over the years, but he’s not yet exactly what you’d call the king of social, especially when other dogs are bigger than he is. I’d started to think that Chico has some history of bad interactions with a larger dog or dogs. Maybe he got run over in rough play, maybe something happened when he was a puppy … it’s all speculation, and on one level, it doesn’t really matter why he’s the way he is, he just is that way. But I think about it often, hoping that if I can identify the origin, maybe I can find a fix.

Then the unit on canine body language in my dog trainer course pointed out that some dogs, by the nature of their body structure, communicate aggression to other dogs. For example, Husky-type dogs like this Samoyed. 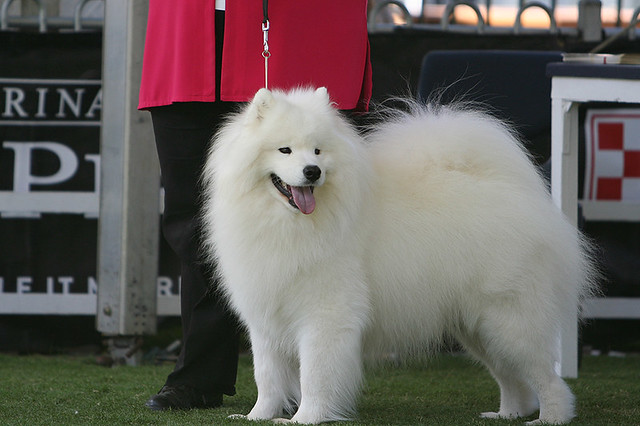 Or these sled dogs: 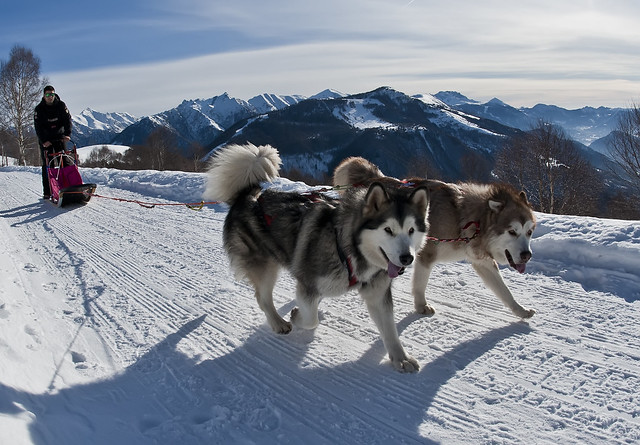 Look at the dog on the left of the pair, the grey one. It is happy and relaxed, doing what it does best, and loving it. The ears are pricked forward, the tail is high and curled. That’s the natural position for those body parts on that dog.

When Chico is standing like that, he’s on full alert status. He expects trouble at any moment and he is in hyper-vigilant mode.

When we got back from the big winter trip, a giant, fluffy, Malamute named Sam had joined our Monday class in our absence. And Chico started to be nervous in class. That’s nuts, Julie’s arena is home turf for Chico. Normally, he can do things there that he can’t manage under the pressure of a new environment. Last week I went to American K9 Country to one of Julie’s Wednesday classes. Again, AK9C is home-away-from-home for Chico. He’s been there dozens of times: with Julie when she’s had him for board and train, with me for many agility trials and to a couple of other Julie classes. Last week he was a nervous wreck – not tuned in to me, wandering the arena instead of settling on the start line, panting inappropriately for the amount of work and the temperature. And there was a Samoyed in that class.

This weekend, I was talking to one of Chico’s human friends about this thought forming in my head … that Chico is especially nervous around dogs of that Husky body-type. “Oh, yes,” she said, “I had a couple of huskies once and they freaked out other dogs all the time. The tail carriage, the ears, the forward facing, and (in my dog’s case) one blue and one brown, eyes – my dogs just wanted to be friendly and other dogs completely lost it.”

That backs up what I learned in class with a practical example from a thinking dog person. So this isn’t anyone’s fault, and it may not even be correctable, but understanding it can help me manage it.

I’m pretty sure that Chico is resistant to active play with bigger dogs because he once ended up at the bottom of a pile up like this: 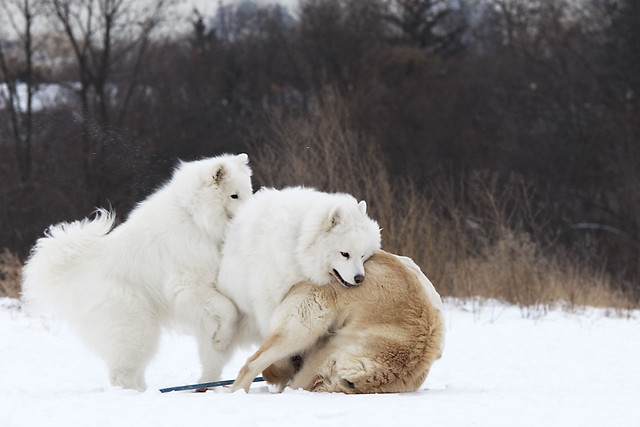 But, again, that’s pure speculation and maybe over-thinking on my part, I wasn’t there when (and if) such a thing happened.

My next homework is to observe dogs in action and make as many notes as possible about their body-language. I hear the dog park is busiest between 8 and 10 in the morning. So, I suppose, that’s what I’ll be writing about next.