Wow, what happened to last week?

Posted on December 7, 2014 by annieriecken

Last week sped by with appointments that went entirely un-photographed, so I’ll try to use my sparkling prose to describe them*. Some were mundane and very boring for a dog – the human had a teeth cleaning and a committee meeting, others were all about him, but maybe not to his taste – we went to see the vet who is also an animal chiropractor and sometimes her treatments have been upsetting to Chico. This time he was really a hero about it all, he just stood there, giving the occasional little lip curl or once or twice pressing his side into me. The first time we saw Dr Amanda it was a non-stop flow of treats into Chico’s face and he still wanted to snap at her, the second time it was better, this third visit went much, much better. I put Chico on the scale and he weighs forty-four and a half pounds, which is about three or four pounds too much, so we both have to get more exercise. Amanda diagnosed the places on Chico’s flanks that he keeps biting at as little fatty tumors that are forming (he is almost ten) and they probably feel funny as the skin stretches.

I did a little shopping (boring for a dog) and came home with an inexpensive snow tube that I covered with a blanket until I find the right dog bed cover, and made Chico his own air bed (exciting for a dog). 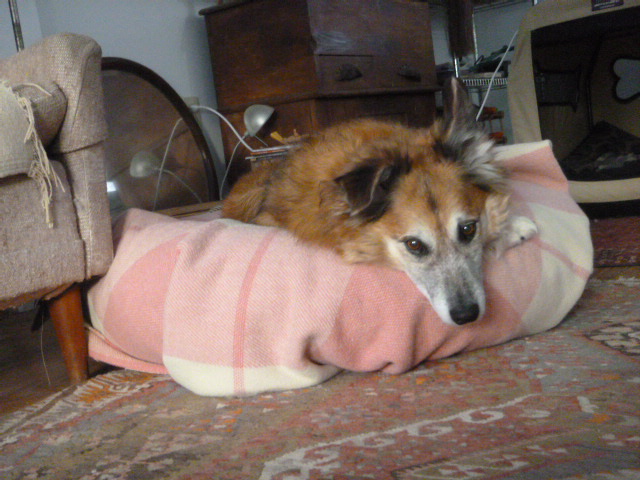 He fits right in there and often chooses the tube bed over other sleeping spots.

Wednesday we met the builders at the Mill and looked at another set of drawings, which I liked better than the first set. I sent them to my kind and generous brother, an architect by training who, for the last twenty years, has been mediating conflicts and reading contracts to prevent conflicts down the road not practicing architecture; and he thought we were wasting space, so he made and sent some drawings to me over the weekend that I do really like. So I have sent those to the builders to see what they think about arranging my space something like they show. When I make some decision, I’ll share images.

On Friday, Dakota got his hooves trimmed, and I made Chico get out of the car. He has been pretty unhappy at the horse barn all fall. Between thinking he got chased by the horse in “the incident” last summer and the puppy that came last winter and is now both playful and twice Chico’s weight, the poor guy just doesn’t want to get out of the car at the barn. There was no puppy on Friday, the horse was secured in cross-ties and all I really had to do was keep the farrier company and write a check, so I made Chico get out of the car. Dragged him out, actually. We stood in the sun, while the humans chatted Chico had a treat every once in a while. I’m trying to rebuild Chico’s horse-trust and our farrier is a fun guy, so it is a relaxed situation; the goal is that Chico will again associate the barn with treats and good times.

On Saturday, we met a man at the Mill and he took away the oak table that the tenants had left behind. It was really neat: I sent pictures of the table to Habitat for Humanity, HfH posted the images at their on-line yard sale, this man bought the table from HfH and came to my house to pick it up. Everybody wins. Even Chico. The man’s pre-teen daughter was a dog lover and Chico let her pet him a bit; when I armed her with treats he would do some tricks for her. However, as soon as I settled, Chico was right on top of my feet and no amount of pretty talk would get him to move. When the furniture starts moving, Chico gets very clingy.

Onward to a new week and new adventures.

*Though I have noticed that my posts solely comprised of re-posting cute animal videos travel a lot further on Facebook than my “sparkling prose.”

This entry was posted in Uncategorized and tagged Bartlett Mill house, horse and dog. Bookmark the permalink.