More than a week later

The weekend before Thanksgiving Chico and  were at the Thanksgiving Cluster, the biggest dog show in the East. Agility, conformation, obedience – four days of canine communing. We had two runs each day, I didn’t want to push it. Our runs were always pretty close together in the day, so we had time to take some walks and do some exploring.

It was a bit slow and careful, but it got us our Excellent Standard title. That moves us to the highest level in AKC. We don’t meet different courses, but we finished the introductory requirements, all the baby levels and now we run with “the big dogs.” Getting to Masters is accomplished by some experienced handlers, with well adjusted dogs, in six months. Sometimes a year or eighteen months. It took us almost six years (we started agility in February of 2010). We didn’t trail every weekend, and we’re not about to start that habit now, but this is a hard won accomplishment for me and my dog.

We had no more clean runs that weekend, but there was one that should have been but I pulled him out of the correct end of the tunnel that was last obstacle and by not stopping instantly, pushed him into the wrong end. It was a clean run in my book, at least by the dog.

AND, as this picture shows, 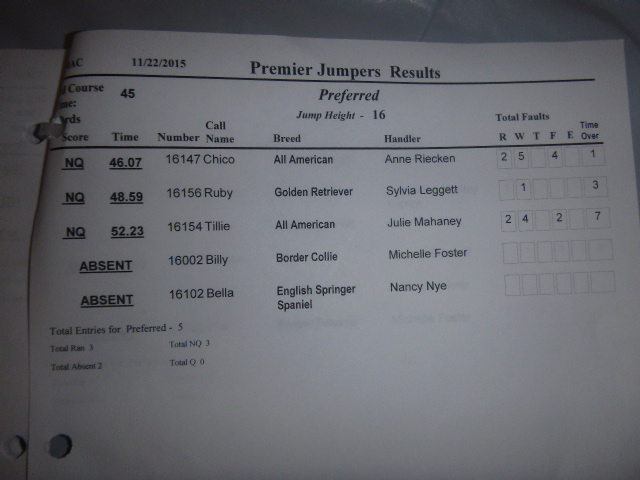 we did have the funnest, fasted, f*#%ed up run of any of the dogs in our Premier Jumpers class. Premier is more like USDAA, with trickier handling and some back sides of jumps and is kinds new to AKC. Well, we did all the obstacles (including the fastest, most balls to the walls set of weaves Chico has done in competition maybe ever), in the order the judge requested, but not always from the side the course map suggested. And it looks like we took down some bars too. BUT, I achieved goal behavior, Chico had NO IDEA that he was ever off course – I made sure that he knew he was doing everything right because he only did exactly what I told him to, and he just went faster and faster, and worked at greater and greater distance from me. Standard course time was 45 seconds, no one in our class qualified, but we were the fastest (at forty-seven seconds) of the group. No do-overs for us, we messed up obstacle three and after that it was just run, run, run.

It was a terrific weekend. I got to have a nice meal with friends from agility class; I ate yummy Turkish food with a long-time-friend who lives near by; the dogs and I got to take a long walk on private land owned by our friend and vet; and we sent Lucy home for a couple weeks to play with other Collies. She deserves a break from grumpy Chico who won’t play with her.

Tonight we start a class in delayed gratification with Lucy, and on Thursday, she comes back home with us. Lucy has an appointment with the groomer on Wednesday, and since all I can seem to do is keep her from being too muddy and filled with sticker-burrs, it’s probably a good idea that she see a professional.