And so it begins

Sunday provided the first unplanned travel adventure of this trip. We’re staying with Kathy and Ben at their place about thirty miles south of Binghamton, NY, and Kathy, Chico and I hopped in the car to go for a Sunday drive. We drove small roads and ended up in Ithaca, New York.

First stop was the famous Buttermilk Falls State Park, where we found it a bit slippery for our city shoes and had to make do with a very short walk.

We drove into town, letting Gertrude (my name for the navigation program in my Droid) direct us to a Vietnamese restaurant we had identified in a quick on-line search. Saigon Village did not disappoint, Kathy and I had a great lunch while Chico waited in the car.

Many Ithaca’s attractions revolve around hiking and/or water, and late February isn’t really the time for that, so we went and walked the Ithaca Commons for a while.

We stopped in to an artists’ collective to look around.

On entry, I asked “Are you a dog-friendly store?” and the clerk acted as though it was the very first time anyone had ever asked that question. She and her boss decided that they probably were dog-friendly for a well behaved dog, and once Chico did some tricks he was deemed to be such.

There was some cool stuff to look at, including the work of an artist who paints shoes.

We loved lots of things, and bought nothing.

Lots of the stores were closed on a Sunday afternoon, but we did wander into a cool second-hand store that was quite dog-friendly. 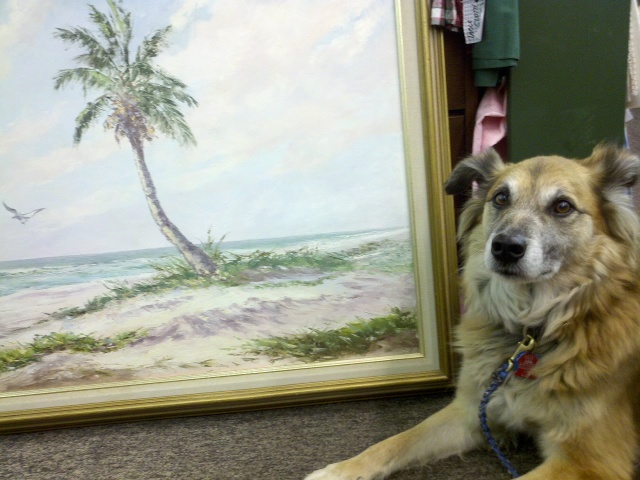 There was furniture, there were household goods, there was art – it was an interesting mix.

Chico was a perfect gentleman in both stores, he was quite interested in the trees and lampposts of the Ithaca Commons, and he scored some leftover duck for dinner.

And we got an invitation to spend a couple days in Memphis with someone we met a couple years ago at the wedding of Kathy and Ben’s daughter.

On Monday morning we’re off for seven or eight hours driving down I81 to Christiansburg, VA, where I have a reservation in a pet-friendly motel.