No, not really, but I am having some trouble with the video from our two trials on the road, and we’ve been in two more since we got home that I haven’t talked about.

The video from the trial in Dallas is in my $16-on-Ebay mini-Flip video camera and I’m wrestling with the built in software and the software I paid for that makes it easy to import to my Mac isn’t letting me register it and I can’t use anything but the expired trial copy, and customer service isn’t responding. In Sacramento, I bought the pro-shot video and am having trouble getting it to open on my Mac. OK, That’s whining, I’ll stop. Sooner or later I’ll figure this all out.

Two weeks ago, we went to Spencer, Mass, to a USDAA trial. We tried a new (for us) game, called Gamblers and did Standard and Jumpers. I had a dog who didn’t listen to me in the first class (Gamblers), and in the second class (Standard), but by the time we got to Jumpers, Chico listened to me and did a beautiful, qualifying, run.

We stayed with Brad and Karis, and Chico left Stuffie behind. And then, a few days later, a package came from Brad, on that day the nicest man in the world, with Stuffie inside. 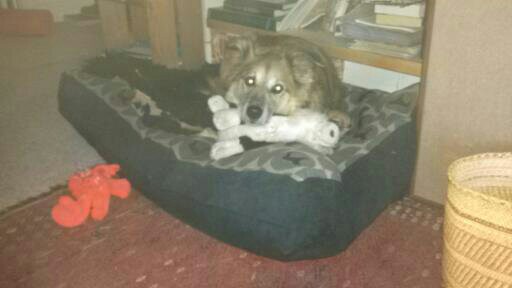 Chico was so happy to get his Stuffie back. He kept Stuffie close by for an entire day.

Then, last weekend we went to American K9 country, a mere 90 minute drive away, to another USDAA trial. It was a big day, we played Standard, Jumpers, Gamblers, and Pairs Relay. First class was Standard and, amazingly, Chico listened to me right off the bat. We did a great round, strangers complimented us when we left the ring, I was pretty darned sure it was a qualifying run. But we got a fault for something, and didn’t Q. We had a personal victory though. There was a place where Chico had to come off the see-saw, turn right, jump a jump, and turn right again and go over the A-frame. And there was a “trap” – a jump directly in line with the jump between see-saw and A-frame. If I didn’t clearly signal to Chico, before he took off for the jump, that we were turning, he was gonna go straight ahead, at a million miles an hour, and jump the second jump, going off course and getting us eliminated. I came up with a plan, successfully executed it, and, when Chico came down the A-frame, I found myself shouting “It worked! It worked!” Maybe that shouting is what got us our fault.

In Gamblers, I had a plan, but ran out of time, so I tried to change it on the fly. That didn’t work so well. Chico went charging off in the wrong direction, when he came back to me, he skidded around a corner to make a jump, crashed into the standard, took the whole thing down, but kept on running, through the tunnel and over the two final obstacles  of the course. That last series of obstacles is the gamble of Gamblers, the series has to be executed by the dog (Chico) with the handler (me) staying behind a certain line. The dog has to operate independently (that’s the gamble – will she do what you ask her to without you at her side?). Chico did get the gamble.

In Pairs, I’m afraid I tried something that didn’t work, and let down our partner (who was awfully darned pleasant about it).

By the time we got to Jumpers, Chico was once again calm and collected and ready to watch me show him where to go. We had a lovely round, I was able to stay out in front of him, we ran clean and got a Q. Our third Q in USDAA Jumpers. That means a title, and at the next trial, we move to the next level of difficulty for Jumpers.

And a title means cake for my classmates, so I made a lemon cake. It’s Chico’s cake, and lemon is better for dogs than chocolate.