My motel in Moab was short on breakfast options, and it’s a super-hip town (in a funky, Monkey Wrench Gang kinda way), so I presumed that I would find a cafe latte someplace. I did, and learned of on a hike to take where a dog could be off-leash, AND got  advice on a spot for breakfast.

Breakfast was at a cafe called Eklecticafe; it was interesting and pretty darned fabulous. 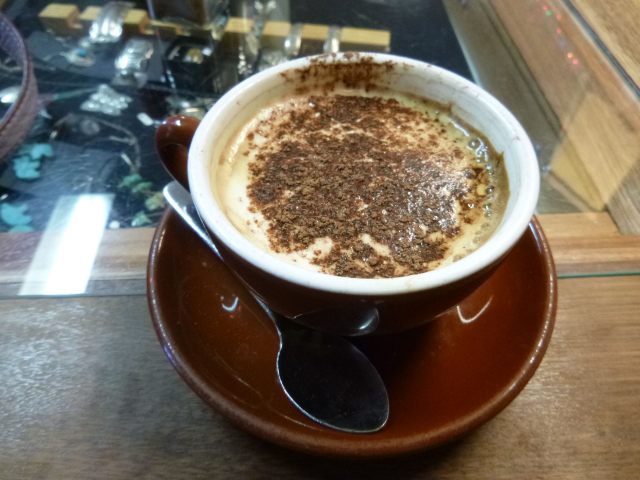 This delicious drink was called a Latin Latte. Espresso made with the sugar right in with the coffee grounds so the water goes through both, steamed evaporated milk (or was it sweetened condensed milk mixed with fresh – oh dear), and a sprinkle of cinnamony Mexican chocolate on top.

The tables were small display cases for hand crafted items from local artisans. You stared right at the things while you ate. Good marketing and efficient use of space, non?

This plate of huevos rancheros was enough for two meals. And perfectly prepared, not too anything (except the too much part).

Then we set off for a good dog walk. 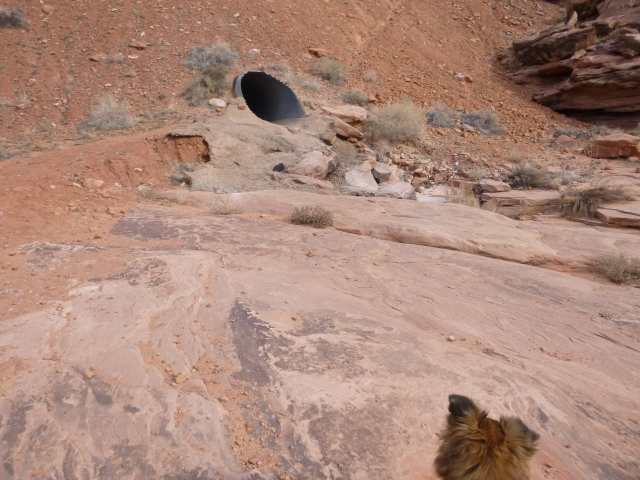 Culvert Canyon Wash is the correct name for this hike. You go through that giant culvert, 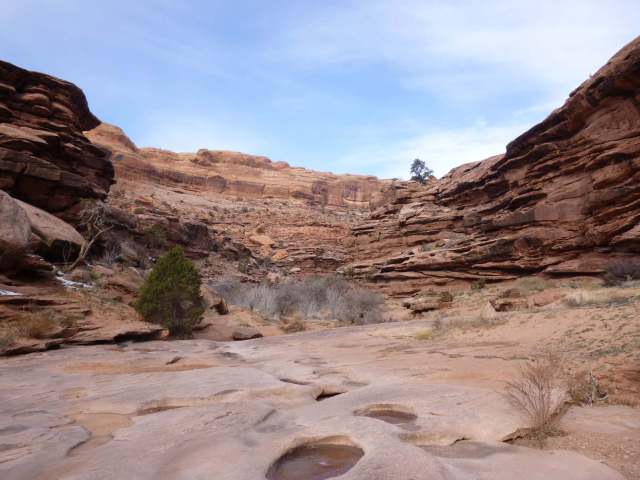 into this dry wash. 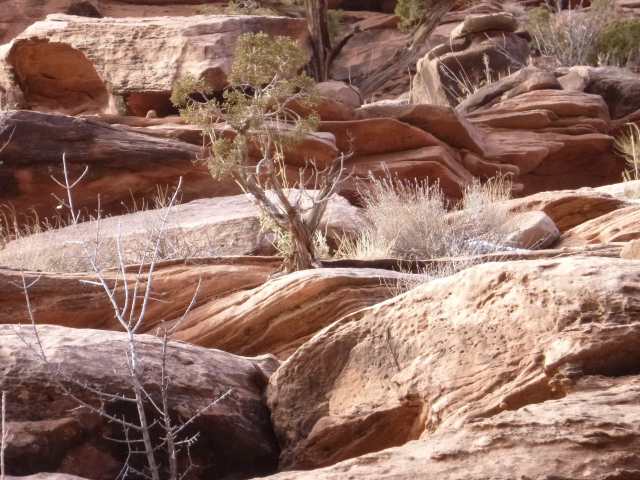 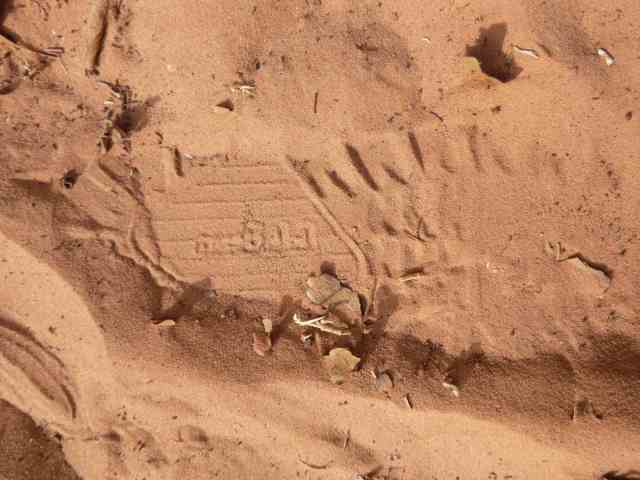 Being the sort of person I am, I couldn’t just turn around after our hike and drive back to town, even though I’d planned to go directly to Arches National Park.

This is so old fashioned, they mean that if you stop here you can see some petroglyphs.

This spot was squished between the river and some high cliffs.

I guess it made for a good bulletin board in days of old.

We drove a bit further and at a put-in for the Colorado River, I saw a sign that lead me to believe there was a short, scenic drive that I could take and end up near the ranger station of Canyonlands National Park. So I took it. 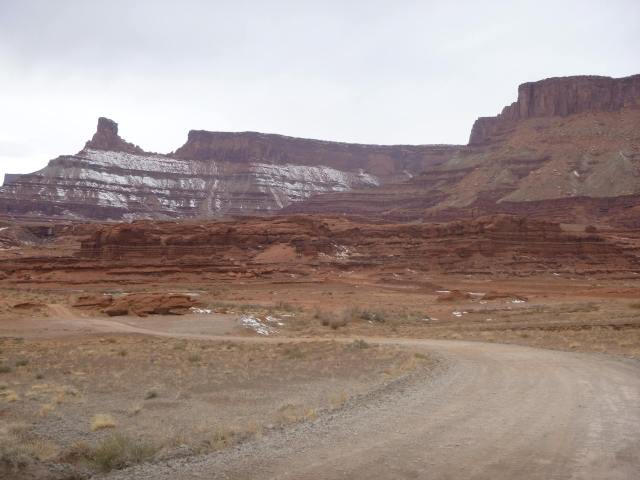 The road was good, the scenery great.

In fact, the rod had just been graded. 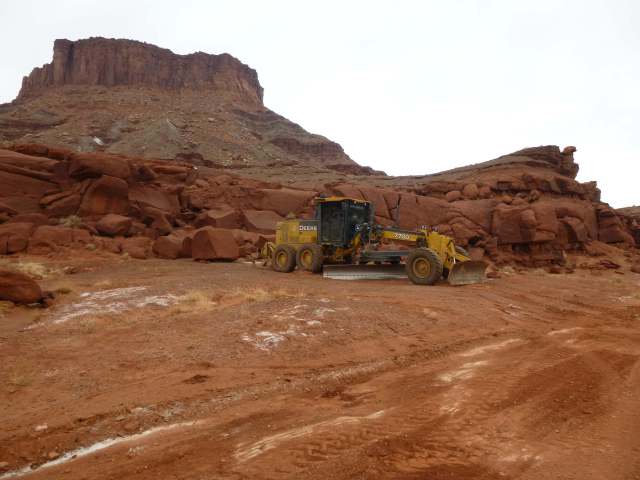 We even saw the road grader.

I was sure I was on the right road, even without a map.

At an overlook of the Colorado, we met two guys on bicycles.

I took a picture of the two of them with their camera, and one of the fellows returned the favor.

When they asked if was “going the whole way” I didn’t think much of it.

I just kept driving because it was so beautiful. 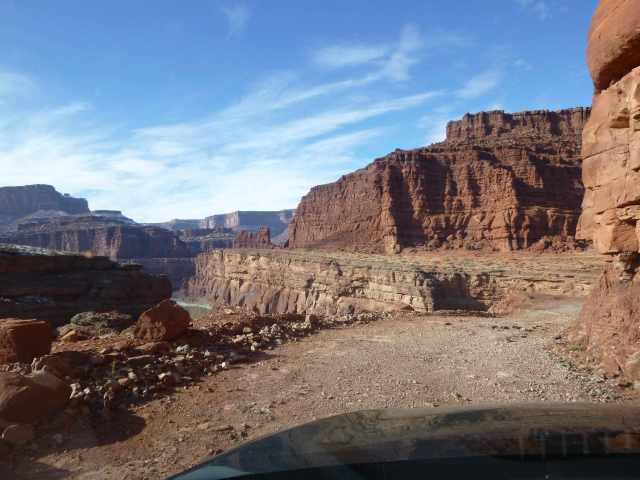 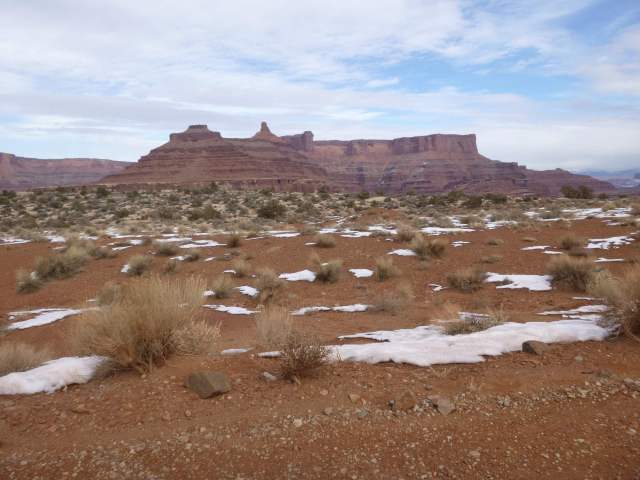 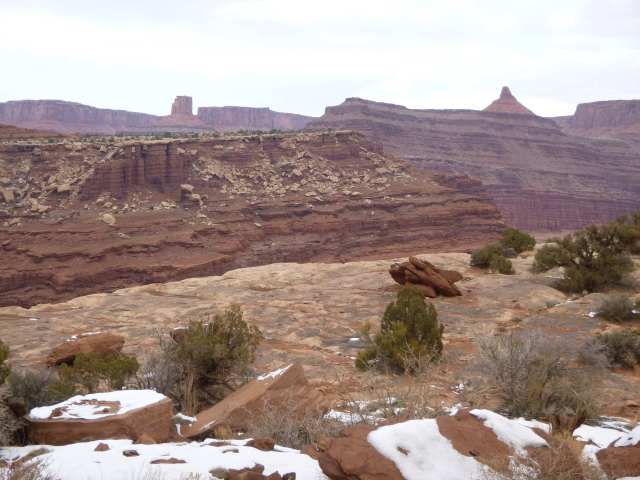 This is Mussleman Arch. The arch itself is hard to get a picture of, or was for me, but it is a thin strip of rock running across this image right about at the middle of the shot (from top to bottom) The arch is quite high, I had to stay away from the edge – getting close made my tummy start to do flips. 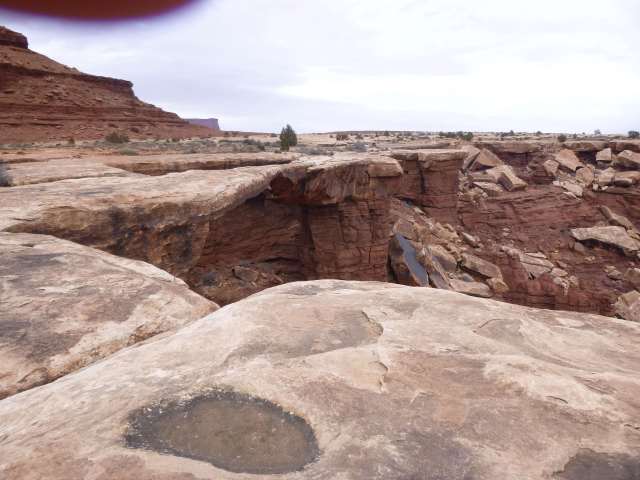 Here it is from the other side. Notice, please, that fissure in the rock starting lower left and running towards the arch.

That fissure is only about six inches wide, but it is wicked deep. Look at these pictures of Chico. He wanted nothing to do with hopping over it, even though he can broad jump his own length on an agility course. 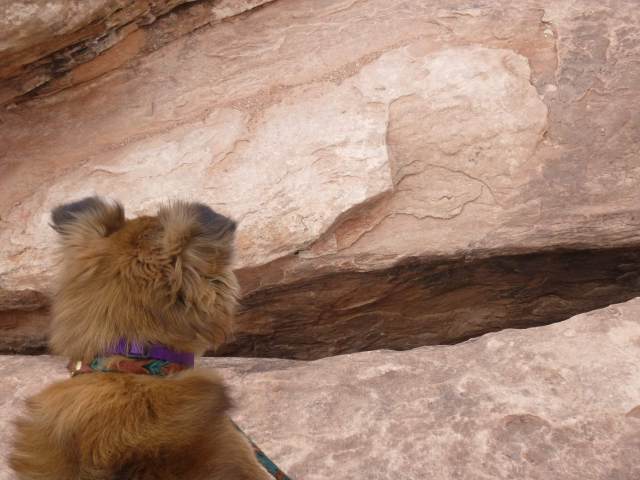 It was beautiful, the sun started to set,

and I realized that I had no idea exactly where I was or why I was still in the park after so many hours. There was a clear and recent set of tire tracks in front of me, I kept seeing campgrounds (deserted of course) and I just kept going. Eventually I rejoined improved, and then paved roads and found my way back to where I wanted to be. It did take eight hours to drive 100 miles, and based on how hairy the road was in the dark, I missed some hella-good views, but in the end, it all turned out fine. I drove on to a room I had reserved for the night in Salina, UT. The fates handed me a snow squall as I went over the last pass on I 70 and the proprietors of my hotel, presumably for safety, tied the fire exit door shut with an electrical cord, but, as you see, I lived to tell the tales.

Next morning I gave a small lecture to the desk clerk about the fire door being tied shut (he shrugged) and blasted out of there. We drove US 50 all the way to Fallon, Nevada and a friendly little Super 8 motel with its own casino.