The past week sped by as I considered appliances for my kitchen and made daily visits to the work site to decide things like where does the shower end, and would the toilet be better over here. It’s quite the deal, but there are enough walls up now that I can start to get a sense of the interior space.

Chico and I also pruned the two apple trees down at the house, I tried to open up the centers of them without taking out so much wood that I kill them.

Since I have spent so much time in my head, this afternoon we took a walk at the Madison Boulder. There we saw this delightful sight: 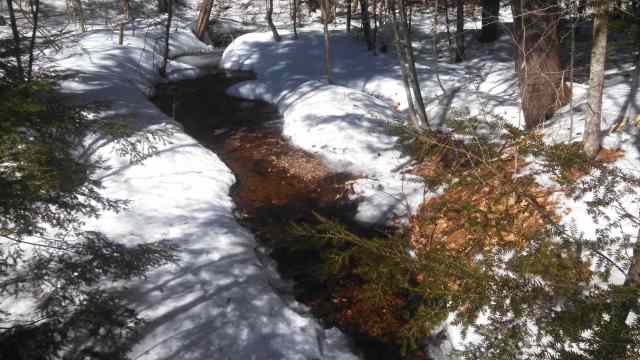 Open water. The stream is flowing freely, at least it is in this sunny spot. 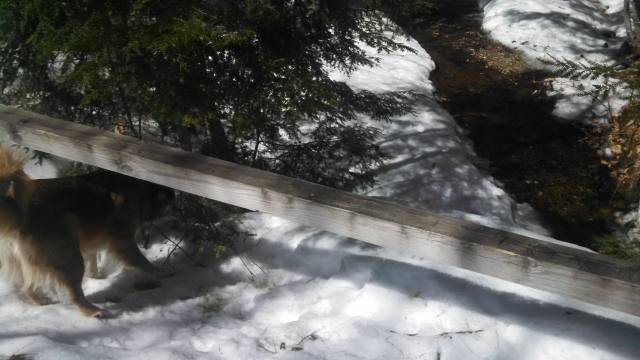 Chico was much more interested in the smells on that tree than he was the water.

And we met a Golden Retriever who wouldn’t listen to its owner’s recall, and refused to take Chico’s imitation of Cujo seriously, insisting on play. I finally picked Chico up and stomped my foot at the dog and told it gently to “git!” which it did. But it didn’t go home with the person and the other dogs, maybe it isn’t even really with them on the walk, just out on its own and along for the ride (as it were). Whatever the situation, that Golden was by our car when we got back, Chico was off leash, and the Golden handled the situation quite well, turning and shoving its rear end into Chico’s face and not moving while he sniffed. My gut said it wasn’t going to fight no matter what Chico said and that Chico was going to say less if I ignored; so I walked past them to open the car, looking only out of the corner of my eye, and when the refuge of the crate in the car was available, Chico happily took it. I gave him a ton of cookies, shut the door, and thanked that Golden for being such a socially skilled canine.