Last Thursday Chico and I went to run throughs at Julie’s and we did great at some tricky stuff. There was one move we were all trying, send out to the right over a jump and then the dog needs to do a 180-plus degree turn to the left to get a weave pole entry and Chico aced it. He got one entry that made everyone go “Oh my god!” I had to send Julie the video of the previous weekend’s weave pole disaster (hey, it wasn’t all titles and ribbons tat weekend i bragged so much) because she didn’t believe we had trouble with a six pole set.

And Julie told me how to better approach the poles (slow myself down a little) as well as all the things I did wrong after Chico popped out after the first pole. And of course, he’s so good in class and run throughs, we’ve not had much chance lately to get that critiqued and improved. Thank goodness I could show her the mistake I was making on video because it doesn’t happen in class.

Did that help me this last weekend? Maybe some, but I didn’t ask anyone to record my runs so I can’t see if I was any better. In three runs we completed the poles correctly on the first try once, better than last weekend. Some parts of each run were brilliant, with other oarts not so much. Chico was pretty unmotivated for the first run, Time to Beat, and I did an excellent job of getting him motivated and ready to go, and he ended up putting in a very good run, getting the hardest parts just fine.  A number of my classmates were also running, and it was really fun and supportive to be with them. Lots of them had Qs and double Qs this weekend, so White Mountain Agility School was well represented.

On the home front, there’s more clearing going on at “da Mill” as we’ve started calling my house. The falling down wire fence around the garden was in the way of the clearing, and way too hard to dig out, at least not for the 100 feet it runs. I wasn’t going to do the work of disengaging it from the roots of the plants that had grown up through it. I was ready to hire someone, when it came to me that I could use my truck. Nice heavy piece of rope, woven through the fence at ground level and the looped over the trailer hitch, pop the truck into four wheel drive, and darned if the thing didn’t rip out of the ground easy as pie.

That gave the brush guy room to work on the brush so the tree guys can cut trees. We went to see how they’re doing. And things are moving right along. Lots of brush is cleared and there’s a big machine in place. 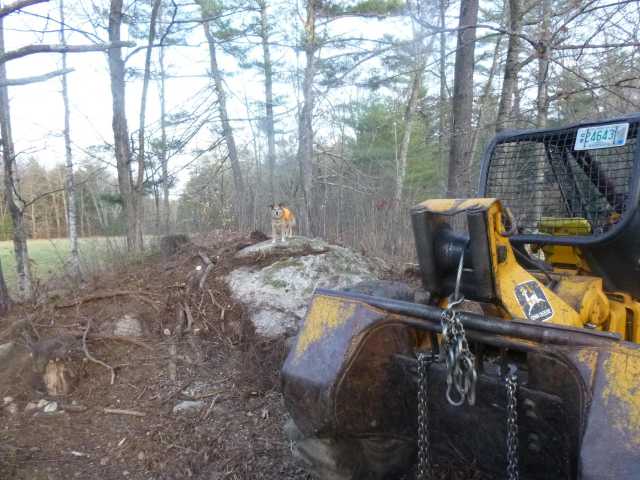 A skidder. An amazingly articulated vehicle that can go over almost anything.

So I called the tree guys and yes, they are coming in the morning, can I meet them there?

So that’s what we did this morning, figure out which trees are blocking my garden, and start the trimming and removing of them. Here’s another “before-ish” pic. 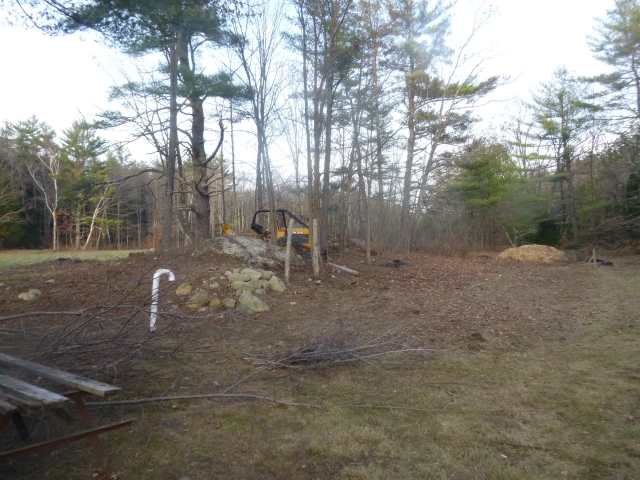 I’ll go back later for some more decisions and some updated pictures.